Let’s take a quick look at Mordenkainen’s Tome of Foes.

I had forgotten that my LGS brings the books a bit earlier than the official release dates so I was very surprised when the owner messaged me to let me know I can come by to get my copy.

The book is 256 pages long, which is around 60 pages longer than Xanathar’s Guide to Everything. I’m very pleased by this increase in pages, since I heard many complaints about how small Xanathar was. 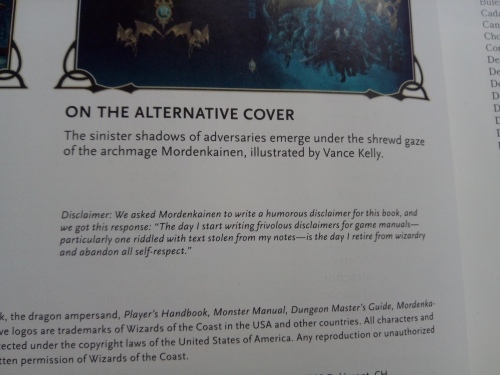 Before I talk about chapter 1, I’d like to mention the preface. I really like how it was written and made my urge to keep reading even greater.

The first chapter of the book talks about the Blood War, the endless battle between the Abyss and the Nine Hells. It begins with presenting the situation and the point of view of each side of the war. Then it talks about the rulers of the Nine Hells. We get information on them, their domain, and how they rule. Keep in mind this isn’t a setting book so don’t be disappointed if there’s not as much lore as you’d like. The amount of information is pretty much enough to follow the idea of 5th Edition, giving enough to the Dungeon Master to create the worlds however they like.

The same goes for the Abyss. We get information on how demons operate and, of course, we get more information on the Demon Lords. I believe the information is more than enough if you want to expand the Out of the Abyss adventure, by adding more Demon Lord related content, such as cults. It also would help to understand how the environment would be affected by the presence of demons in such large numbers. Keep in mind that comparing purely the page count, the devils get more lore than the demons.

But what about character options and tools for the Dungeon Master? I’m glad you asked.

We get Tiefling Subraces based on the Lords of the Nine Hells, just like in Unearthed Arcana: Fiendish Options. I believe there aren’t many changes in these. I’ll take a much closer look and make a comparison if needed. I was very pleased with that Unearthed Arcana installment so I’m happy to see it in an official publication now.

As for the Dungeon Master, there’s a lot of content as well. We get a template on how to make infernal and demonic cambions. Moreover, there’s information on diabolical cults. This makes it really easy to make diverse cults, by giving them different goals and making their cultists different.

Finally, there are some roll tables that I really enjoy. There are tables that generate devil NPCs, customize demons, and create fiendish cults.

The second chapter talks about the history of the Elves, going from their creation to up until their present state. Elves have a very rich history and that’s reflected on the page count. Apart from the bestiary, this chapter is the largest one.

The chapter begins with how the Elves were created and how they could take many forms. We then learn what happened and now there are so many different kinds of Elves all over the multiverse.

There’s also a lot of information about their lives, culture, and their connection with magic. I found especially interesting the part about Elder Elves. It gives a good reason for someone to play an older Elf and gives the Dungeon Master some interesting story ideas.

Moreover, we learn quite a bit about the Pantheon of the Elves. Actually there are two Pantheons, one for the Drow and one for the rest of the Elves. The reason behind that is explained as part of the lore presented previously in the chapter.

The Elves that get their own sections are the Eladrin, the Drow, and the Shadar-Kai. There’s a lot of information that I didn’t know and I’m really pleased by that. A comment I’d like to make here is that I think the lore about the Raven Queen has changed (at least a bit) from the 4th Edition.

As for character options, we get the Eladrin, the Sea Elves, and the Shadar-Kai as Elven subraces. Some changes have been made since their appearance in the Unearthed Arcana series. Also, there are no Avariel or Grugach as options and I get it. What we saw in Unearthed Arcana wasn’t exceptional so it makes sense they weren’t included. Especially the Grugach Elves because they didn’t feel like a good idea to have them as a character option in their current form.

Finally we get an Elven trinkets table and a couple of tables that provide story hooks. 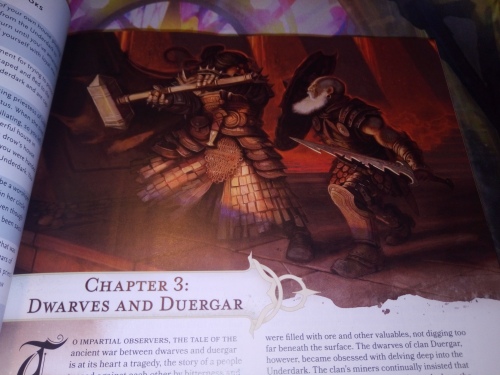 Moving on the chapter 3, which talks about the Dwarves and what happened with the Duergar. I had no idea about their story and I found it very interesting to read.

Just like with the Elves, we get information about the culture and society of the Dwarves. We learn a bit about how clans and strongholds work, which helps a lot to get into the mindset of a Dwarf.

Of course we learn a lot about the Duergar. They are portrayed as a dark reflection of the Dwarves so they have similarities on how some parts of their societies work, but their end goals are different. That’s also why we get different Pantheons here as well.

As for character options, we only get the Duergar subrace. However, we get a lot of roll tables that can be quite useful tools if a Dungeon Master wants to add more depth to the Dwarves (and Duergar) of their world.

Chapter 4: Gith and Their Endless War

Chapter 4 talks about the Gith. It expands the information provided on the Gith on the Monster Manual. The lore begins after they were freed from the Ilithids and talks about the two factions, the Githyanki and the Githzerai.

We learn about their philosophies and how their societies are structured. We also learn a bit about the places they call home. An interesting thing is that there are no mentions on religion, which kinda makes sense.

The character option provided is, of course, the Gith race with its two subraces, the Githyanki and the Githzerai. We’ve seen this in the Unearthed Arcana but there are some changes. At this point, I was expecting a few roll tables and indeed we get some. We get tables for Gith names, personality traits, ideals, bonds, and flaws. Of course, giving roll tables for the Dungeon Master to use is important as well. There are roll tables that help create Githyanki raiding parties and Githzerai groups.

This chapter is an interesting addition to the book. While the theme of the book is about conflicts and the balance keeping them from ending, chapter 5 talks about halflings and gnomes who have avoided any major conflicts. To be fair, conflicts have avoided them and that’s the weird thing about them.

Apart from this difference, the chapter continues like the previous ones. We learn about the way of life of the Halflings and Gnomes as well as about their Pantheons. I really liked a small side section about Halfling superstitions because it helps to understand the way some Halflings think. To be honest, all the side sections in this chapter were quite interesting.

The character option of this chapter is the Deep Gnome. It has been seen before in the Elemental Evil Player’s Companion, but this time has been fully implemented as a Gnome subrace. We also get a couple of roll tables for Halfling and Gnome personality traits,  ideals, bonds, and flaws.

The bestiary is the last chapter of this book and takes up almost half the book, with over 130 stat blocks. The monsters contained in it are related to the previous chapters. For example, the first monster presented is the allip, which is mentioned in the Gith chapter.

As promised, we see a lot of monsters with a CR of 10 and above. In fact, almost half of the monsters are CR 10 or above. The majority of the entries are fiends, with humanoids following at second place.

The Demon Lords that were included in the Out of the Abyss adventure are also here. My only complaint is that there’s no entry for Lolth. It’s mentioned that she doesn’t really take part in the Blood War but it’d be nice to have her stat block as well.

The only note I have for the monsters is that some of the higher CR ones don’t feel that strong. I’ve also confirmed this in the Out of the Abyss adventure. The fights with the Demon Lords felt a bit underwhelming. The encounter design may be partly at fault but I believe it’s also the monster’s fault. That’s why you’ll see differences between the Out of the Abyss stat blocks and this book’s ones. Design of higher CR monsters isn’t easy and it seems the D&D team hasn’t managed to master it yet.

There’s also an appendix with monster lists that make out lives a bit easier. There are three lists that sort the monsters by type, CR, and environment. Keep in mind that the environment tables don’t include every monster of the book.

Before the final words

It’s important for me to note that the information is presented like Mordenkainen would have presented it. What I mean is that you won’t see any bias against any side.

For example, I really enjoyed how Asmodeus and his opinion on the Blood War is portrayed. Another example is that we can see that it’s not 100% the fault of the Duergar for their fate. The rest of the Dwarves played their part as well.

Another thing I’d like to mention is the art, which is amazing. There are a couple of two page art pieces which are stunning.

Overall, I’m very pleased with Mordenkainen’s Tome of Foes. It’s a really good lore book that can provide you with a lot to work with. And it’s not just the information provided. Just by reading the first chapter alone gave me a full page of plot hooks I could use.

Should you get it? It depends on how much you like lore. In my opinion, the book is meant to provide lore and monsters. Character options are third in line. Technically, you can use the Unearthed Arcana for most of the character options, if you don’t mind that there have been changes.

However, I suggest getting it, especially if you’re a Dungeon Master. There’s a lot of content you can either use as is or shape to your liking. I’m definitely going to get my money’s worth from it.

And until next time, have fun! 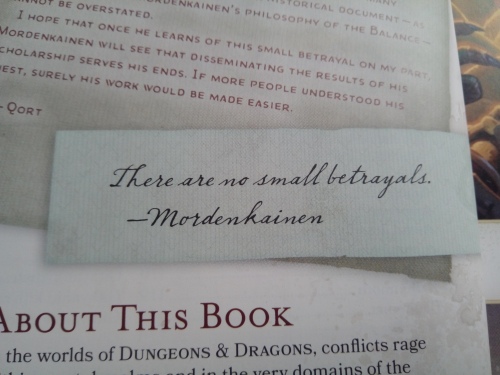