Minotaur’s Betrayal is an adventure for a party of 6-8 level characters, by P.B. Publishing.

This adventure is the second part of The Minotaur Trilogy. In the first part, the characters had to earn the respect and help of the Minotaurs by completing the trials of their arena. This was done in order to get reinforcements to protect a nearby town from an Orc raid.

In the second part, the characters will find out that the attack was actually a ruse. The real target of the Orcs was the Minotaur settlement in order to retrieve a powerful artifact. Now the heroes have to go to the Orcs’ stronghold and take revenge for their fallen Minotaur friends and retrieve the artifact.

It is stated that there’s no problem running this adventure without having played the first one. I totally agree with that. However, if you want to get the most out of this adventure, I highly recommend checking out the Minotaur’s Bargain first. I say this because not only does it set the scene very well, but also it will help the players get into the mindset of the Minotaurs.

The culture of the Minotaurs isn’t the same as the one portrayed in the Monster Manual. These ones are driven by honor. Knowing this, the players will understand the decisions of some Minotaur NPCs, as well as know how to treat them. That said, you can just let them know how honorable the Minotaurs are, but make sure you do it before the adventure starts because it plays a role right at the beginning.

The adventure is divided into four chapters. The first one is an introduction that includes information about the difficulty, leveling, as well as an adventure synopsis.

The second chapter is where the adventure begins. Its purpose is to connect the 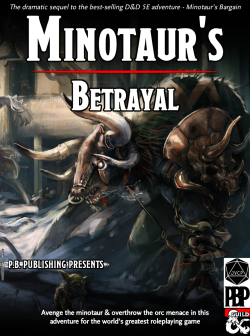 previous adventure with this one, or to introduce the players to the story. It features the travel towards the town in order to reinforce it against the Orc raid, the battle for the town, and the return to the Minotaur settlement and finding out what has happened there.

The third part is the main part of the adventure. It features the journey towards the Orc stronghold and the assault against the Orcs there. It’s the biggest chapter of the adventure, since the stronghold is quite big, well detailed, and filled with encounters.

The fourth chapter is there to provide a conclusion based on the actions of the characters during the adventure.

The adventure features a lot of encounters. Almost all of them are combat encounters and are considered tough for a party of 6th level adventurers. If you want to expand the adventure even more, there are opportunities to add random encounters, though I believe the amount already provided is satisfying.

The characters will be presented with opportunities to avoid some of the encounters, by either stealth or social interaction. Most of the social interaction part will be in the form of approaching some Orc NPCs or interacting with the Minotaurs themselves. Actually, the Minotaurs are going to be a bit of a challenge because they are honor driven. They’ll want to charge into the enemy in many cases and the party will have to convince them that’s not a wise decision. Finally, there are going to be a few non Orc NPCs in the stronghold as well. It’s up to the characters to decide if they will help them, since some of them are in no state of providing any help to them.

As expected, since the main part of the adventure takes place in a Orc stronghold, many encounters feature Orcs. The adventure uses almost all the Orc variants from Volo’s Guide to Monsters, so you’re going to see a variety of Orc adversaries. Apart from the Orcs, however, there are a few other monsters that can be met in the stronghold.

Finally, for every encounter there’s an info box, that provides the DM with suggestions on how to adjust the encounters, in case they can or need to be adjusted.

The cover art is beautiful, depicting an awesome looking Minotaur. In the interior of the adventure you will find a few more art pieces of the same quality. There are also maps for each area of the stronghold mentioned in the adventure. In one of the appendices, you will find all the maps connected together, showing how the stronghold is structured.

There are three new magic items included in this adventure. One of them is the artifact that should be retrieved. The characters are expected to return it to the Minotaurs for safekeeping, but it may not be that easy due to its properties.

There’s also a reference page, with all the content used from the Player’s Handbook, Monster Manual, Dungeon Master’s Guide, and Volo’s Guide to Monsters. Not all the information and stat blocks are included in the adventure’s document so you will need the books mentioned to run the adventure.

A couple of notes

There’s an extra dice mechanic that can be used, once inside the stronghold. It’s based on how well the characters roll and affects the attack rolls of both them and the creatures.

The layout of the adventure is good, but there are a couple of editing errors here and there. However, they don’t affect the game.

Overall, Minotaur’s Betrayal is an interesting adventure and, story wise, a good sequel to the first one of the trilogy. However, it’s made in a way that’s perfectly fine adventure to run as a standalone, especially if your players are interested in combat heavy scenarios.